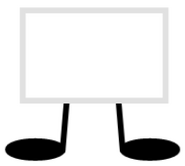 Calligraphy when he's folded up. (Note that his arms are inside the folded part.)
Community content is available under CC-BY-SA unless otherwise noted.
Advertisement